In accordance with the FTC, Quill Café would like to disclose that the reviewer purchased this book. The opinions expressed are hers alone and no monetary compensation was offered to her by the author or publisher. Cover art is copyright of BBC Audio and is used solely as an aide to the review. 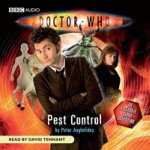 The Doctor and Donna arrive on a planet, where humans and centaurs rage war over the right of the land.

With the TARDIS carted off and Donna separated and branded another soldier, the Doctor soon discovers there are more horrific deeds afoot.

A large species of insect is threatening to wipe out both sides of the war.

The question is: how did they come to be on the planet and who is organising their spread?

It seems that no creature is safe from infestation or the extermination that comes from another source all together: an automaton with a very simple pest control solution...kill everything.

Can the Doctor and Donna convince the humans and the centaurs to put aside their hatred and band together?

This is the first exclusive Doctor Who audio book I've listened to (not a narrated novel but instead written straight for radio play) and also the first one narrated by David Tennant.

A science fiction with centaurs? Count me interested! Although, I had no idea I was in for it when I purchased the audio book. I really just wanted to hear David Tennant's narration and I wasn't disappointed. I loved being pulled back to the ways of his Doctor and his dynamic with Donna.

Tennant narrates the novel with his wonderful Scottish accent and has a great vocal diversity for the accents of different characters. He really brought to life the alternate characters and scenarios in the story. I could picture it well.

One thing in this audio book that was different to the other Doctor Who ones I've listened to, is the inclusion of music and sound effects. It really added a distinct mood and added to the tension build-up. The fact that you could hear the noises that the insects made was eerie. A fantastic new dimension.

'Pest Control' is divided into two parts and is somewhat like experiencing a two-part episode of Doctor Who, only audibly. I'd recommend it to any avid Doctor Who fans, especially those of the 10th Doctor.