The Hodgeheg by Dick King-Smith

In accordance with the FTC, Quill Café would like to disclose that the reviewer bought this book at a little shop in York. The opinions expressed are his alone and no monetary compensation was offered to him by the publisher. Or anyone. At this rate, he's going to have to get a job. Cover art is copyright of Puffin Books.* 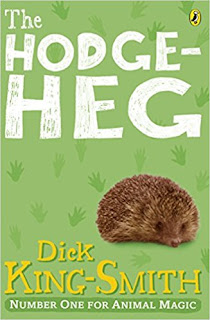 "Why did the hedgehog cross the road?" sounds like the lead-in to a bad joke. Instead, it is the premise for a cautionary tale about a curious hoglet.

Max is a young hedgehog with a dream – to venture to the park on the other side of the road and hunt out the delicacies it has to offer. Curious and ambitious, he sets off to find the humans' secret to crossing the road safely. What follows is disastrous. The victim of a hit-and-run, Max becomes disoriented – head spinning, words jumbled – yet he persists in his goal.

Max is an endearing protagonist. You can't help but root for his can-do attitude. He never loses sight of his goal, even when everything he thinks and says is jumbled. When asked how he is he says "KO" instead of "OK." Admittedly, this is a pretty accurate summary of his current state. Thankfully he never tries to say "Dick King-Smith." That could have rather rude results.

Max's determination may come from a place or bravery or ignorance. His parents talk about the demise of many hedgehogs, but don't directly engage their children in conversation about it. He has three sisters, but unfortunately they are underdeveloped and indistinguishable from one another. My favourite character in the book is Uncle B. He is the Dumbledore of hedgehogs. His eyes twinkle and everything. 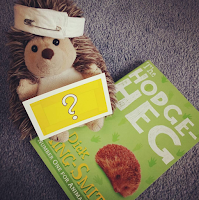 'The Hodgeheg' is riddled with medical inaccuracies. Max falls asleep after suffering a concussion – very dangerous – and the book peddles the Hollywood myth that a head injury can be cured by another head injury. Max also has incredible eyesight, managing to see several details, even at night. Hedgehogs cannot see well, let alone after suffering a serious injury.

'The Hodgeheg' is a short book that can be enjoyed in one sitting. It has a wonderful message about perseverance, but horrible medical advice for a story that revolves around road safety. Best read with a grain of cynicism and a dash of suspended disbelief.

*The puffins live in the Random Penguin House and tell stories to children.
Posted by Quillbert at 2:45 PM