In accordance with the FTC, Quill Café would like to disclose that the reviewer borrowed this book
from a nefarious individual. He held it hostage for many moons. No monetary compensation was offered to him by the author, illustrator, inker, colourist, letterer, or publisher. He could use some to pay for therapy. Cover art is copyright Marvel. 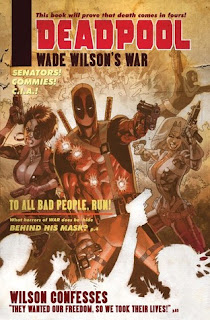 This was my first Deadpool comic. I am scarred for life.

Not because of the violence, or the language, or the crazy. No. It is because the comic book people played with my mind. They made me question my own sanity. I did not like it. They are the Weapon X of my life and this is my origin story.

The comic starts off savvy. There is intrigue and Deadpoolian humour. Wade is recounting his deadly shenanigans to some official stiffs. There are many scene cuts/flashbacks. New readers who know &^%# all about Deadpool get some insight into his origin story.

Deadpool is a special soul. He is a loony, a maniac. He is also aware that he is a comic book character and breaks the fourth wall. It is marvelous. These traits are all executed in 'Wade Wilson's War' – but then things get whack, and I don't mean Deadpool-fun-times [lewd pun redacted].

The narrative is psychotically skewed. This is expected from the mind of Deadpool, but this comic tries to imply that all of Deadpool's antics do just that – happen inside his mind. He is still crazy, but the reader is lead to question whether he is enlightened or just delusional, and the comic is full of conflicting information. Deadpool says this, security footage shows that. What is real? Who is alive? Who is dead? Is Wade Wilson just a crazy man who thinks he has superpowers?

'Wade Wilson's War' takes the unreliable narrator trope and [innuendo metaphor redacted]. If that sounds good to you, read it – but be warned. You may exit this journey with conflicting emotions and more questions that you can contain.

Am I real or a fiction? Am I free or a puppet? Am I sane or a prisoner of my own imagination?

I no longer know.

Posted by Quillbert at 5:42 PM