In accordance with the FTC, Quill Café would like to disclose that the reviewer borrowed this book on audio from the library, read by the author. The opinions expressed are his and no monetary compensation was offered to him by the publisher. Cover art is copyright Puffin Books.* 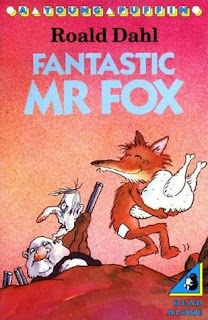 This is the story of Mr. Fox, who feeds his family by poaching from three farmers. Naturally these farmers are miffed and come after Mr. Fox, placing his family and all his neighbours' lives in jeopardy.

The three farmers are mean, mean, mean. They are also ugly. If there is one thing I have learnt from Roald Dahl, it is that mean people are ugly, and ugly people are mean. Still, these mean ol' blokes do work for a living. They may be cruel, but they are understandably ticked off by Mr. Fox's antics.

Both Mr. and Mrs. Fox are terrible parents. Not only does Mr. Fox put his children's lives on the line, but Mrs. Fox wails about how her children are going to die...right in front of them. She also tells them she would rather have them slowly starve to death than catch a bullet. Then Mr. Fox puts them to work on empty stomachs. And the prize for Worst Parents Ever goes to...the Foxes!

Naturally Mr. Fox's clever solution is to do more poaching from the three farmers. What could possibly go wrong? He even ropes in other animals to help him out in his criminal activities.

What is meant to make Mr. Fox sympathetic? Is it that he is an animal being hunted? Mr. Fox is a carnivore, killing animals left and right. Only those poor creatures didn't do anything to Mr. Fox. Hypocrite!

'Fantastic Mr. Fox' is the story of a fox that is in no way fantastic. It is a tale of gross entitlement that seeks to glorify criminal activity.

*I bet Mr. Fox would kill and eat puffins.
Posted by Quillbert at 6:58 PM